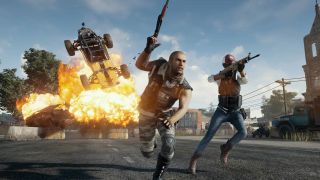 As a fan of sick vehicle stunts in videogames, I've seen a lot of impressive stuff. I've watched GTA 5 players bounce cars up to skyscrapers, Warzone pilots chop up the competition with helicopter blades, and Battlefield daredevils leap out of a jet, bazooka another jet, and get back in.

Believe me when I tell you that those all pale in comparison to PUBG streamer Kebabator, who successfully exploded a car high into the sky and vaporized two enemies as it fell back to earth over a hundred meters away. Watch it unfold below.

My first reaction after watching the clip was "that is the luckiest double kill I have ever seen." But it also seems nearly impossible to get a car flying that far. Chatting with Kebabator this morning about the stunt, there's an exact science to this absurdity that requires practice, careful aim, and a lot of gas cans.

"I've practiced it maybe about 100 times," Kebabator said. "This was my fifth successful attempt." The mechanics of the car catapult are simple, but surprisingly precise:

If you've gotten the timing perfect and the trajectory right, the C4 on the car should explode as it lands, killing anyone within a whopping 25-meter radius. On the scale of PUBG, that's basically a tactical nuke. Given how many things have to go right to pull the trick off,  a double kill is especially rare. To maximize chances of success, Kebabator says, you have to choose the right vehicle and map. "The best map for doing this is, hands down, Vikendi," he said. "It's the only map with the Zima, which flies the best, and there's a high spawn rate of gas cans, so it is pretty easy to gather the number you need (usually 6 or 8)."

Apparently, stacking up eight gas cans will launch a car up to 200 meters, but that much oomph can keep it in the air so long that the C4 explodes too early. For this reason, Kebabator said, six cans is the sweet spot.

You also have to choose your target carefully. "The damage radius of C4 is pretty wide, so if there is anyone in that building or around the vehicle, it kills them instantly. That's why it's easiest to aim for a fairly small compound of about four buildings, where you have the highest chance of killing the enemy if you manage to land the vehicle in the center of the compound."

Kebabator says that the car catapult was not his idea originally. As far as he knows, his friend and fellow PUBG streamer Benjoii, who is known for pulling off unlikely kills in the game, popularized the tactic. "We got to know each other during his streams and started doing this kind of shenanigans together. So what I performed here is based on what he taught me."

Morgan has been writing for PC Gamer since 2018, first as a freelancer and currently as a staff writer. He has also appeared on Polygon, Kotaku, Fanbyte, and PCGamesN. Before freelancing, he spent most of high school and all of college writing at small gaming sites that didn't pay him. He's very happy to have a real job now. Morgan is a beat writer following the latest and greatest shooters and the communities that play them. He also writes general news, reviews, features, the occasional guide, and bad jokes in Slack. Twist his arm, and he'll even write about a boring strategy game. Please don't, though.