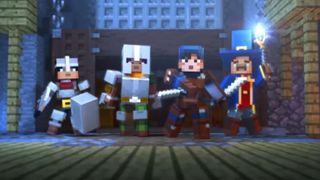 Minecraft Dungeons, essentially a "baby's first Diablo-like" that shares its setting with Mojang's popular sandbox game, was exclusive to the Microsoft Store when it launched in 2020. It's now arrived on Steam, coinciding with the release of the Ultimate Edition, which combines the base game with its six DLC add-ons—Jungle Awakens, Creeping Winter, Howling Peaks, Flames of the Nether, Hidden Depths, and Echoing Void—as well as the soundtrack and digital artwork. Of course, you could just play it on Game Pass instead.

Though it doesn't have crafting, or indeed mining, Minecraft Dungeons does tie into the Minecraft lore, setting you up against the Arch-Illager to destroy the Orb of Dominance and become the hero of the Overworld. It also features four-player co-op and, as of November last year, cross-platform play for the PC, Switch, Xbox One, and PlayStation 4 versions.

Rachael Watts gave it a solid 75 in her review. "Minecraft Dungeons is the perfect introduction to dungeon crawlers for beginners and a breezy adventure for veterans", she wrote. "It doesn't have anything in particular that makes it stand out, but it's a fun, streamlined take on the dungeon crawl genre."