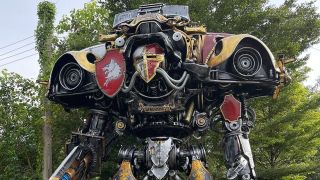 In the Warhammer 40,000 universe, the vehicles and giant robots deployed by armies of the Imperium are made on Forge Worlds, entire planets dedicated to industry under the mandate of the tech-priests of the Adeptus Mechanicus. The Imperial Knight mech you see here (via Warhammer Community) was made by the staff of a game shop in Thailand out of scrap metal and cars.

"The top part was made from an entire Volkswagen," the creators told Warhammer Community. "It took many months to complete, and it is based on the Canis Rex miniature. The replica's base was made from cement and steel fibre so that it could hold more than four tons of the Knight's weight, and it was sanded, grassed and a cactus was added."

It was made with help from the metalworkers of Ban Hun Lek, a museum in Ang Thong that builds replicas of everything from Transformers to xenomorphs. The shop in question is Legendary Wargame, who also run a gaming and miniature-painting club on weekends. When asked why they built the mech, they replied, "who doesn’t love a big robot? It's the most iconic Imperial Knight. If there are xenos attacking the club in the future, we hope our Knight will move by itself and protect us!"

They also made an Outrider motorbike, and while the Knight Preceptor was constructed at half-size, the bike is to scale. You can't ride it, however, as the wheels weren't designed to rotate. "Everyone wants something like this on the road and wants to try to ride it," the team said. "We want to pretend to be a Space Marine, riding it, fighting against Ork hordes."

Each of the two took roughly a year to finish, and Legendary Wargame apparently have plans for more. "We are building more realms of battle, more play zones, and a coffee shop. In the future, we will also make a big ship or a dragon, or maybe both," they said.

If you want to see these impressive replicas in person, or the alien tyranid built into the wall in-store, you'll have to visit Legendary Wargame in Nonthaburi, Thailand.